ST. LOUIS – “You can’t fight for anybody if you’re not in the room. My goal is to be in as many rooms as I can to fight for young people.” The quote spotlighted by the St. Louis Business Journal is the essence of Sylvester Taylor’s passion for bringing more opportunities to minorities in the electrical and communications technology industry.  Taylor, who is director of diversity, equity and inclusion for the IBEW/NECA Electrical Connection partnership, was saluted as a “Champion of Diversity” by the St. Louis business publication at a September 9, 2021 luncheon. 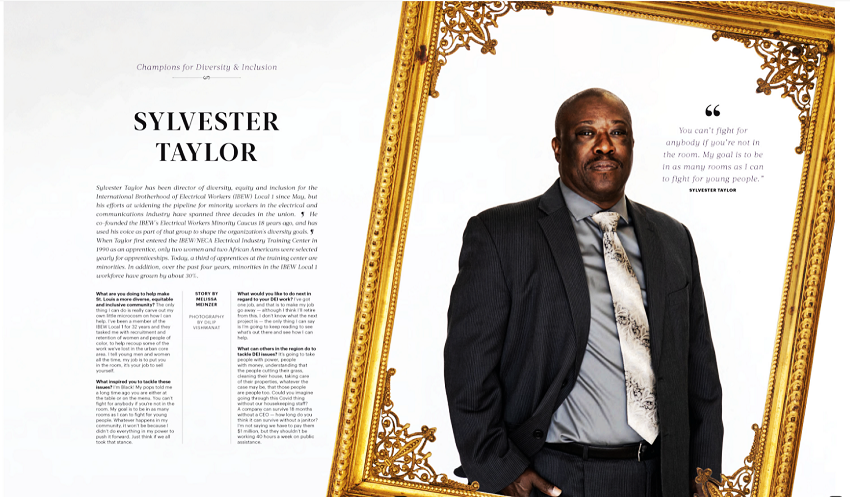 Taylor was honored along with 14 other individuals and two organizations for advancing greater diversity in the St. Louis region.  In its profile of Taylor the St. Louis Business Journal noted, “…his efforts at widening the pipeline for minority workers in the electrical and communications industry have spanned three decades in the union.

He co-founded the IBEW's Electrical Workers Minority Caucus 18 years ago, and has used his voice as part of that group to shape the organization's diversity goals.

When Taylor first entered the IBEW/NECA Electrical Industry Training Center in 1990 as an apprentice, only two women and two African Americans were selected yearly for apprenticeships. Today, a third of apprentices at the training center are minorities. In addition, over the past four years, minorities in the IBEW Local 1 workforce have grown by about 30%.” Learn more.