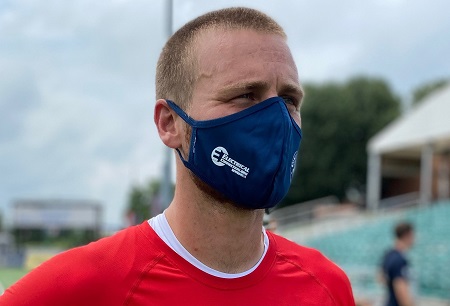 “There was a lot of enthusiasm at the game coming on the heels of Saint Louis City SC unveiling the team name and logo two days earlier,” said Jim Curran, executive vice president, Electrical Connection.  “There is a definite buzz about soccer in St. Louis and we are proud to be sponsors of the sport to keep that fire burning.”

This is Saint Louis FC’s sixth season.  Since its inception, the Electrical Connection has been a major sponsor with its name emblazoned on the jersey.

“It has been a wonderful partnership for our NECA contractors and the skilled IBEW workforce they employ,” noted Curran.  “Even with the pandemic, enthusiasm for the team and sport has not waned.  But St. Louis has always been a great soccer town.”

The season was interrupted as the St. Louis area navigated the challenges of the pandemic.  It resumed on July 11, 2020 after Saint Louis FC adopted Covid-19 safety protocols for fans and the team, including the wearing of masks at home games.

Masks and other Saint Louis FC apparel are available for purchase on the team’s web site www.saintlouisfc.com