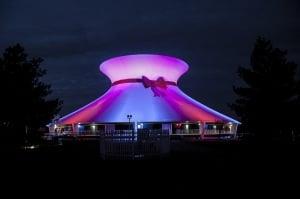 Look for dazzling lighting effects on the Saint Louis Science Center’s James S. McDonnell Planetarium this holiday season. White lights in swirling patterns and decorative images are projected on the Planetarium’s iconic shell that is illuminated in ever-changing colors each night. The dramatic lighting display is in addition to the red ribbon and bow that has become a holiday tradition for the famous St. Louis landmark for more than four decades.

“We are fortunate to have terrific partners and through their generous support, our new lighting system adds an aesthetic dimension to a structure that has become a beloved fixture not only in Forest Park but the entire St. Louis region,” said Bert Vescolani, President and CEO.

The Planetarium’s dazzling new LED system was made possible by the Electrical Connection, a partnership of the St. Louis Chapter, National Electrical Contractors Association (NECA) and the International Brotherhood of Electrical Workers (IBEW) Local One.

“The relit Planetarium is a brilliant reminder of the great institutions St. Louis offers the public,” said Jim Curran, executive vice president of the Electrical Connection. “The world around us is changing and relighting the Planetarium reminds all of us that St. Louis is part of that change.”

The Planetarium’s new LED system is capable of projecting 16 million variations of colors, images and movement. The decorative patterns are produced by six gobo projectors mounted on poles that circle the planetarium. In addition, the system uses almost 70 percent less energy and the LED lights are expected to last 10 to 12 years with little or no maintenance.

“The Electrical Connection is a valued partner helping us to promote STEM and robotics education through their on-going and generous contributions,” said Vescolani.