And there’s nothing quite like a well-lit Ferrari in a showroom or service bay.  NECA contractor Bell Electrical Contractors performed the electrical work, including lighting, on the St. Louis area’s first Ferrari dealership which is now open in Maplewood, Mo.  Bell was part of the building team led by Brinkmann Constructors. In praising Bell’s work and that of its foreman, Andy Govreau, Ferrari Service Manager Matt Twedt, noted they were “very happy with the clean and functional install. Andy was fantastic and happy to help while on site with any issues that arose.” 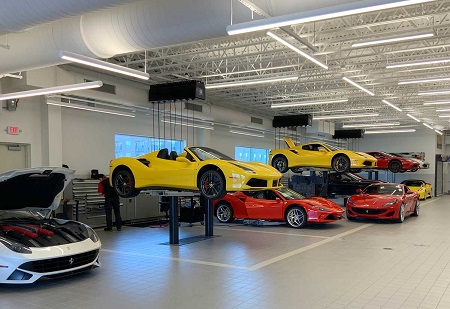 The aviation industry relies on our IBEW/NECA contractors for a variety of projects, large and small.  In Jefferson City, NECA contractor MidStates Energy Co. completed a major electrical design and installation for new hanger built on the grounds of Jefferson City Memorial Airport.  The airport is the sixth busiest airport out of 127 public use airports in Missouri with an average of 35,000 flights per year.