The newest technology tool to combat crime in St. Louis was designed and installed by the team of Electrical Connection contractor TSI Global Companies and tech company Daktronics.  The massive, high-resolution LED video wall at the Real Time Crime Center in Missouri is used by the St. Louis Metropolitan Police Department. It interfaces with live security feeds from across the city of St. Louis to deliver instant communication for the department. The video wall measures 4.5 feet high by 48 feet wide and features 1.2-millimeter line spacing to deliver high-definition imagery for critical information inside the crime center. The technology can be viewed from as close as mere feet away from the display and delivers a crisp, clear picture. Learn more.

Electrical Connection and St. Louis NECA contractor Aschinger Electric is part of a team being honored as 2021 Design-Build Project/Team Award Winners for renovation and safety upgrades on the Robert A. Young (RAY) Federal Building in St. Louis. The early 1930s Art Deco brick and terracotta RAY Federal Building underwent a $75 million design-build renovation to provide additional shelter-in-place opportunities and safe exiting for the building’s 3,000 occupants in the event of an earthquake. The renovation commissioned by the U.S. General Services Administration (GSA) mitigates seismic hazards and includes the first use of seismic dampers in a St. Louis building retrofit.  Aschinger seismically braced all of the electrical equipment in the building, including more than 10,000 fixtures upgraded with LED lighting, and rerouted existing circuity in order to accommodate the seismic dampers. It also performed some tenant improvements in agencies that were updating their space during the project. The team’s innovation enabled all work to be completed while the building was 100 percent occupied by 3,000 employees from 48 separate government agencies.  The project will now compete in the National Award of Excellence and Project of the Year to be announced at Design-Build Institute of America’s Design-Build Conference & Expo Awards Ceremony, November 2, 2021.  Learn more.

The careers in our electrical industry have always been energized by generations of families who have found the work rewarding and embrace how much our IBEW workforce is powering and connecting the world.  And now daughters are following their mothers' careers in the industry as noted in a recent article in the St. Louis Labor Tribune.  IBEW Local 1’s skilled electrician Aly Martinez, an instructor at the IBEW/NECA Electrical Industry Training Center, now proudly watches as her daughter Trinity begins her career as an apprentice at the training center. Learn more. 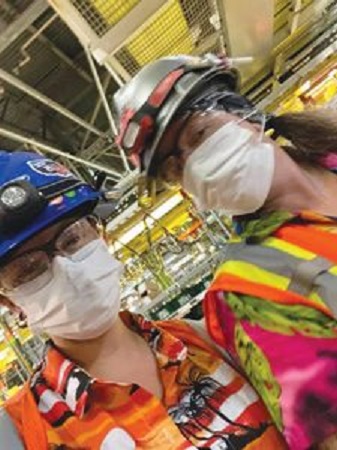