IBEW and NECA members offered a peak into the future in the latest edition of St. Louis Construction News and Review in a feature entitled “Construction Workforce 2030: Who Will We See Working? What Technologies Will They Be Leveraging?” IBEW Local 1 Business Manager Frank Jacobs noted that the increasing diversity of its workforce will continue.  He also predicted greater advancements in prefabrication for more efficient delivery of projects. In the same article, Guarantee Electric Missouri Branch President Dave Gralike noted “a total renaissance of technology will drive the industry to take a completely different approach to work.” Read the full article.

One technology that unfolded in the first two decades of the millennium is solar energy and IBEW/NECA has played a significant role in its reliability as a renewable source of power. That was most recently on display with the completion of Missouri’s largest solar array atop a BJC HealthCare parking garage in Midtown St. Louis. NECA contractor Sachs Electric Co. and its IBEW workforce installed the solar array that began generating 1.8 megawatts of energy earlier this fall, with more than 4,500 solar panels covering an area the size of two football fields.  Read the full story.  Previously, the largest solar array in the state was built atop the IKEA store in St. Louis – a project that was handled by NECA contractor Aschinger Electric Co. and its IBEW workforce. 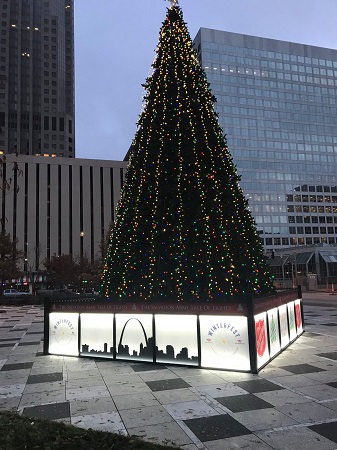 Another NECA contractor TSI Global Companies earned a ranking among the nation’s top 50 systems integrators by the trade publication Systems Contractor News.  The 32-year-old contractor has completed 544 integrated systems installation to date in 2019 and ranked 39th in the country. Commercial audio-visual (AV) integration accounts for more than 50 percent of the firm’s revenue.