As the St. Louis Cardinals were winning their heart-pounding 11th world championship in 2011, the Electrical Connection was working on a partnership to energize the team’s great fans in another way – introducing solar energy for the first time at Busch Stadium. When the April 13, 2012 opening day game rolled around, fans were celebrating and enjoying food, beverage and retail shops powered by 106 solar panels, producing approximately 32,000 kilowatt hours of solar energy per year.

The Electrical Connection teamed with the Cardinals, NECA-member Sachs Electric, IBEW Local One and Microgrid Energy to not only introduce solar energy to Busch Stadium, but to educate fans on renewable energy. Today, fans can find an educational kiosk providing information about the project and solar energy at the Ford Family Plaza. There, they will also see two solar arrays located on the roof of the ticket building on Clark Street and atop a canopy in the left centerfield bleachers.

The solar arrays produce electricity that feeds into the stadium’s electrical distribution system and mixes with the power from the grid for use throughout the stadium. There are no batteries and all the energy produced is used in the stadium. The solar energy offsets the grid power used by stadium operations, reducing electrical bills. Although the offset is a relatively small percentage of the stadium’s power use, it will result in a large amount of savings over the life of the system. 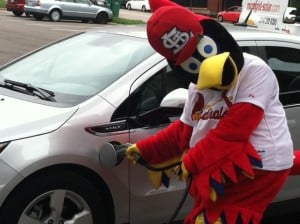 “This is all part of the St. Louis Cardinals’ commitment to green its game,” said Joe Abernathy, vice president, stadium operations. “Since the stadium opened in 2006, we’ve been able to cut our energy use by 20% and water use by 10%.”

The skilled IBEW/NECA team led by Sachs Electric and the Electrical Connection further advanced the Cardinals’ green goals in 2013 by installing the first-ever electric vehicle charging station at Busch Stadium. The charging station is located south of the stadium in parking lot “B.” “Our partnership with the Electrical Connection and Sachs Electric has been valuable in advancing our sustainability commitment and educating the public about energy conservation,” noted Abernathy.

The Electrical Connection supports St. Louis’ love of the Cardinals in other ways through advertising during the games and poignant tribute to Stan “The Man” Musial. 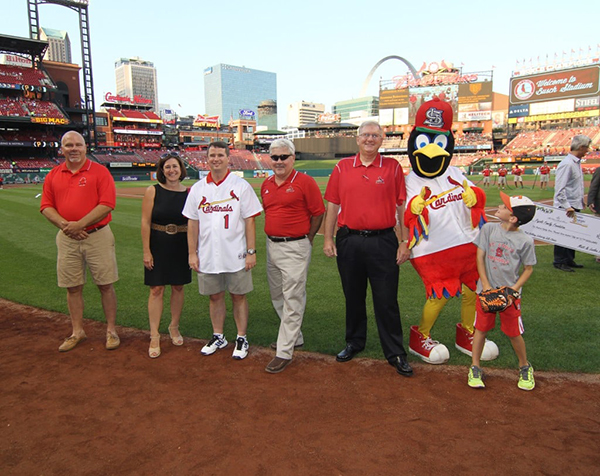