No one knows when or where lightning will strike, but when it strikes a home it can cause massive damage to electrical systems, appliances and electronics in the home.  Indeed, the Insurance Information Institute reports that $909 million in lightning claims were paid out in 2018 to almost 78,000 policyholders.  That was actually the third straight year that claims filed declined, but the pay outs continued to increase – up 21.5% from 2016 to 2018. Smart home technology and greater use of electronics in the home are among the reasons for the increased cost. 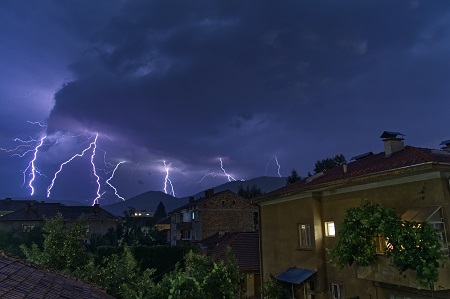 So, with more to protect in the home, what do homeowners need to know about lightning strikes and surges in the electric grid that could damage a home.  We tapped our residential electrical experts for some tips:

·         Lightning is fickle and can enter the home in any number of ways.  It doesn’t even have to be a direct hit, but a direct hit generally causes more damage.  Nearby strikes can find their way into a home through pipes or wiring.

·         Having devices plugged into surge protectors will greatly reduce potential damage, but they aren’t a failsafe, especially when the home takes a direct hit. Remember to include phone, internet and cable TV wiring in surge protection.

·         Once inside the home, a surge from a lightning strike can cause a fire in the wiring behind walls or in ceilings and damage sockets, switches, fixtures, electronics and appliances. Damage to wiring within walls can be very costly to determine.

·         Damage to home automation equipment will largely depend on how intensive it is integrated in the home.

·         The damage potential to large appliances, such as washers and dryers, has also increased since many now contain control boards to operate the embedded electronics and digital displays. In addition, vulnerable internal circuit boards and electronics are now found in stoves, ovens, refrigerators, furnaces, air conditioners, garage door openers, electric vehicles being charged and sprinkler systems.  Whole house surge protectors can offer some protection to these large appliances and electronics (see next bullet).

·         There are whole-house surge protection devices that can be integrated with the circuit panel and stop the surge from a lightning strike there as long as that’s the entry point.  These are typically installed to protect homes from lightning strikes to a power pole, sending a surge to the meter on the home and into the circuit panel. They also protect the home in the event of an unexpected surge from the electric grid. If the discharge enters the home from any other point than the surge-protected circuit panel, such as a pipe or outside receptacle, it will cause damage until reaches the surge protector.

·         When storms approach with numerous claps of thunder, you can always unplug your electronic devices and appliances to protect them.  That isn’t always practical, but keeping abreast of approaching storms and the severity of lightening is possible through several weather and lightning tracking web sites such as iweathernet.com.

If your home is damaged in a lightning strike, call your insurance company to determine what is covered in policy.  Then call the Electrical Connection to find one of our licensed NECA contractors for repair work. You can also search our data base of licensed electrical contractors at www.electricalconnection.org.