ST. LOUIS – At age 63, former Army reservist Reginald Moore has helped his share of people using his degree in social work.  But then he was hit by a car, his health declined and he became the one in need of help.  Moore was one of 15 low income homeowners who found that help in an annual home improvement program supported by the IBEW/NECA Electrical Connection partnership.  The partnership is comprised of the International Brotherhood of Electrical Workers (IBEW) Local No. 1 and the St. Louis Chapter, National Electrical Contractors Association (NECA). 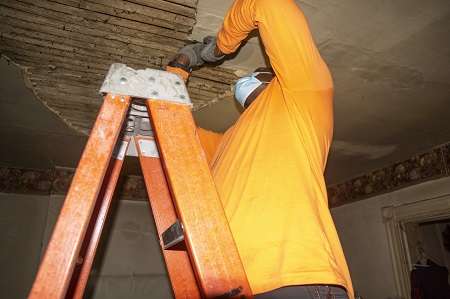 On April 23, 2022, IBEW/NECA volunteers made much needed electrical improvements to homes, including Moore’s.  It was the 19th year that the labor-management partnership mobilized an army of electrical contractors and electricians to help Rebuilding Together St. Louis improve lives in low income homes St. Louis city and county.  The effort drew news coverage from Fox 2, KMOX radio and KMOV-TV. 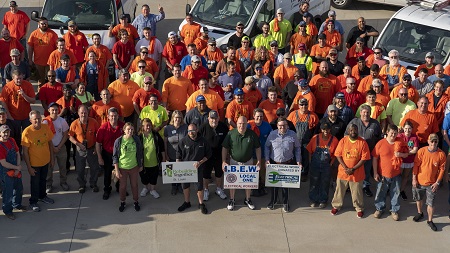 When Moore was hit by a car several years ago, his arms and hip were broken. He now has a degenerative hip, is diabetic with heart issues and chronic pain. “There was a time that I could help people and do things myself to keep my home up,” noted Moore.  “But physically, I just can’t do it anymore. It is such a blessing to have organizations like the Electrical Connection work with Rebuilding Together to improve lives like mine.” 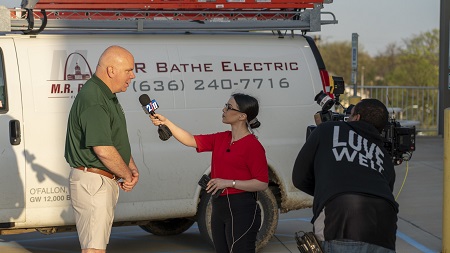 Moore lives in the Wells-Goodfellow neighborhood in a home that had only two working outlets and exposed wires from a “quick fix” job by someone not qualified to do electrical work.

“We see this all the time,” noted Frank Jacobs, business manager, IBEW Local 1. “People hear a good pitch from a so-called ‘handyman’ who has no business trying to make electrical repairs. They leave behind hazardous conditions that we are frequently called upon to repair and bring up to code.” 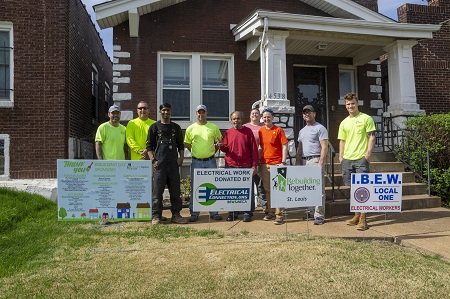 After the Electrical Connection made repairs and brought the faulty wiring up to code, Moore now has working outlets throughout his home and most importantly, peace of mind. 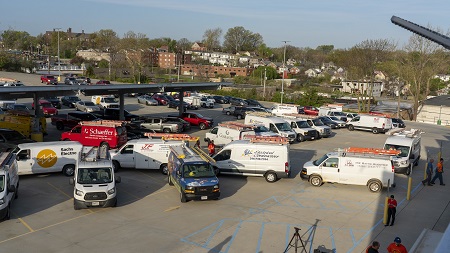 The day of volunteering began with Frank Jacobs and Rebuilding Together Executive Director Elaine Powers addressing 150 IBEW electricians and 29 NECA and IBEW signatory electrical contractors gathered at the IBEW Union Hall at 5850 Elizabeth Ave.  They then fanned out into communities in the city and St. Louis County to make repairs and install improvements such as ceiling fans and better lighting.

“Studies have shown the frequency of electrical fires is higher in homes more than 40 years old,” noted Kyle McKenna, executive vice president, St. Louis Chapter NECA.  “But add to that the frequent state of disrepair of many low income homes and the possibility of electrical hazards increases quite a bit.  We’re proud that our NECA contactors and their IBEW workforce took their Saturday off to ensure these homes are made safe.” 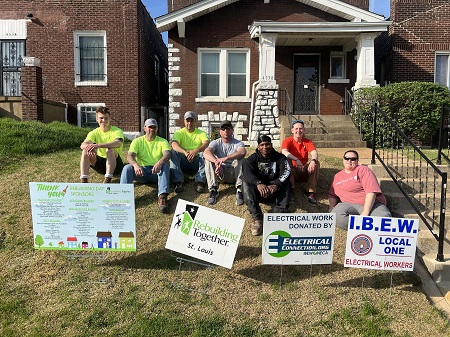 Since 2003, the Electrical Connection has donated more than $2.3 million in labor and materials to improve 570 homes for low-income, disabled and elderly St. Louisans.

Rebuilding Together St. Louis has provided free home repairs in St. Louis for nearly 30 years, focusing on projects that improve homeowners’ safety, health, and independence. Executive Director Elaine Powers says “Our long-standing partnership with the IBEW and NECA has helped Rebuilding Together increase the scope of services we are able to provide as we help homeowners age in place in their own homes.”

The Electrical Connection represents the largest number of licensed commercial and residential electrical contractors and skilled electricians in the region with a searchable data base at www.electricalconnection.org.

Electrical Connection, NECA and IBEW signatory contractors who donated service trucks and tools in the Rebuilding Together effort this year included:

For more than 25 years Rebuilding Together St. Louis has provided free home repair to low income homeowners and veterans in need so they may remain safely and comfortably in their own homes. Since its founding, the organization has rehabbed more than 3600 homes; 68 community spaces and touched more than 57,000 lives. For more information visit www.RebuildingTogether-STL.org or call 314-918-9918.