ST. LOUIS – The year 2021 kicked off with an incredible scientific achievement – the Mars landing of NASA’s Perseverance rover – a moment that should inspire greater commitment to STEM education.  And now in its 10th year of supporting the Saint Louis Science Center, the Electrical Connection is recommitting to focus its support on the St. Louis institution’s STEM education programs.  The Electrical Connection is a partnership of the International Brotherhood of Electrical Workers (IBEW) Local 1 and the St. Louis Chapter, National Electrical Contractors Association (NECA). 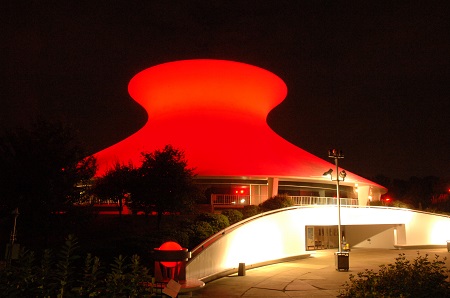 “When the Science Center lit the James S. McDonnell Planetarium red to salute the Perseverance landing, it also honored this nation’s commitment to science, technology, engineering and math,” noted Jim Curran, executive vice president, Electrical Connection. “We remain committed to supporting dedicated teachers and inspired students in creative STEM programs like those of the Science Center.”

The Electrical Connection has sponsored the lighting of the Planetarium since 2013 and has provided relevant electrical industry expertise on the applications of STEM subjects, including robotics, building automation, smart infrastructure, renewable energy and electric vehicle charging stations.

“Our long partnership with the Electrical Connection has been invaluable in advancing our mission to ignite and sustain lifelong science and technology learning,” said Todd Bastean, president and CEO of the Science Center.

A centerpiece of that mission is the Science Center’s Youth Exploring Science (YES) program.  For more than 22 years, the YES program has fortified STEM education in underserved communities in St. Louis.  It targets high school students from underserved communities, offering learning experiences in fields such as integrated medicine, agri-science, cybersecurity, aerospace, renewable energy and even esports programming. Since the program launched, more than 1,185 teens have graduated from YES and more than 206,000 St. Louis community members have been engaged in STEM learning through YES outreach initiatives.

“The YES program mirrors our ‘earn while you learn’ hands-on training program that has defined the IBEW/NECA Electrical Industry Training Center for 80 years,” said Frank Jacobs, business manager, IBEW Local 1.  “In our outreach for greater diversity in the electrical industry, YES strengthens the potential to excel in engineering and installing electrical and communications infrastructure, the very foundation of everything we teach.” Jacobs serves with Curran on the Science Center board of trustees.

Among YES notable graduates are Dajae Williams, a NASA engineer, and Isaiah Collins, who was awarded the 2020 St. Louis American Foundation Scholarship.

“There’s so much potential out there to become the next 21st century innovator,” noted Doug Martin, executive vice president, St. Louis Chapter NECA. “It will always be the Electrical Connection’s mission to help St. Louis realize that potential through our support of creative STEM programs.”

Reflecting on the current Mars mission, Curran lauded homegrown businesses that can inspire STEM achievements by supporting the Science Center’s mission, including Masterclock, based in St. Charles, Mo.  After being engaged with the Science Center by the Electrical Connection, MasterClock CEO John Clark donated a precision clock made by MasterClock and similar to one supporting NASA Mars missions, where a day is 39.6 minutes longer than on Earth.”

"Masterclock was proud to support our friends at the Science Center by providing an updated timing system and displays to keep operations and visitors in sync,” said Clark.   “Our technology powers some of the most cutting-edge work being done on (and off) the planet, and we're proud to provide the same deployment capabilities to our local institutions as we do to the folks who make missions like the Mars rover possible."